A Guide to the Statistician's Stage Magic

Audience gasps with disbelief. An isolated nervous chuckle is heard from the back. Then the applause ensues. The croud cheers the magician. Either magic works or 42 is indeed the answer to everything! In any case it's an amazing result.

In statistics there is a reliable procedure for generating similarly amazing tricks (they are often called paradoxes). It works like this.

An example of this procedure are "demonstrations" of nonconglomerability by Stone (1976; for brief description go here).

The magic generating Algorithm is also popular in the Frequentist vs Bayesian wars, where it usually adopts the following form.

Rouder and colleagues push a new paper where they deconstruct frequentist confidence intervals. They work some serious stage magic along the lines of $A_2$.

Here is what they tell us. Consider the following example (p.3):

A 10-meter-long research submersible with several people on board has lost contact with its surface support vessel. The submersible has a rescue hatch exactly halfway along its length, to which the support vessel will drop a rescue line. Because the rescuers only get one rescue attempt, it is crucial that when the line is dropped to the craft in the deep water that the line be as close as possible to this hatch. The researchers on the support vessel do not know where the submersible is, but they do know that it forms distinctive bubbles. These bubbles could form anywhere along the craft’s length, independently, with equal probability, and float to the surface where they can be seen by the support vessel. The situation is shown in Figure 2A. The rescue hatch is the unknown location $\theta$, and the bubbles can rise anywhere from $\theta−5$ meters (the bow of the submersible) to $\theta$+5 meters (the stern of the submersible). The rescuers want to use these bubbles to learn where the hatch is located

Here is their Figure 2A: 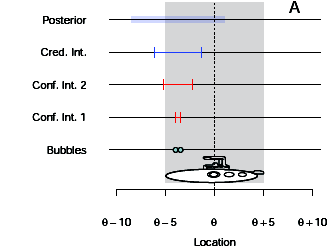 This result is shown in the figure in the second row from bottom. Following issues arise. When the two bubbles are near one another (left panel) the CI falsely claims high precision. In this situation, we can't say where the hatch is. The two bubbles could come from the bow or from the stern, but we don't know. When the two bubbles are far apart (right panel), one of them is at the bow and the other is at the stern. We then know with high precision that the hatch could be only located halfway between them. In this case instead CI incorrectly shows low precision.

Assume $p(\theta) \propto 1$. The observations are generated from the uniform distribution (not normal! hence $M_2$)

Rouder et al. argue that confidence intervals should be discarded and we should use credible interval instead.

Now here is how the show is performed at Café Fischer. A good Bayesian ($P_B$) really shouldn't choose uniform distribution as a prior as we did above. It is highly unlikely that the lost submersible has been carried 1000 miles away from point of initial submersion point $\theta_0$. Therefore a gaussian prior parametrized by mean $\theta_0$ and standard deviation $\sigma_0$ is a much better choice. Then we choose the likelihood to be a conjugate distribution to the prior as is common in bayesian inference. This means that $p(x|\theta)$ is gaussian ($M_1$), i.e. $x_i \sim \mathcal{N}(\theta,\sigma)$. Next, we add a scaled inverse $\chi$ prior for $\sigma$ and marginalize over it. The posterior is a student's $t$ distribution. Discarding the negligible influence of the prior we obtain a 50% credible interval for $\theta$ that is identical to the CI of the unconfident frequentist.

We look up the definition of confidence interval in Wasserman (2004) in Section 6.3.2.:

Above we saw all four procedures and method pairs in action $(P_F,M_1),(P_B,M_2),(P_F,M_2),(P_B,M_1)$. Clearly, whether a procedure fails depends exclusively on the model it assumes. In general, we should pay more attention to the choice of the appropriate model rather than the choice between bayesian and frequentist methods.

As for the statistician's stage magic, this can be useful tool for illustrating common confusions to students. The real danger then comes from people who managed to fool themself with their own stage tricks.